Born in 1976 in Queens, New York, Brett Mohr began to show signs of being an artist at a very early age. When he was only three years old, his nursery school teacher could already discern his artistic talent, and she predicted that Brett would be an artist one day. Brett did, in fact, spend much of his childhood and early teens constantly drawing, sketching, and doodling on every available surface: in the margins of his school notes, in his text books, even on his bedroom walls. In awe of all sorts of animals, dinosaurs in particular intrigued him, the focus of his artistic talents.

Although Brett takes interest in several areas, including music, psychology, philosophy, math and science, he inevitably felt compelled to pursue his great love of art. He graduated from Queens College with a B.A. in Studio Art and later attended The School of Visual Arts, where he attained an additional B.F.A. in Illustration. It was here that he became enamored with such artists as Bosch and Escher, drawing inspiration from their dark aesthetics, their enigmatic themes and their intellectual uses of optical illusions.

Brett currently still resides in Queens. He is a fine artist as well as a freelance illustrator. His artwork has been shown in a number of group exhibitions in NYC over the years, and three of his pieces were published in S.V.A's annual portfolio publication in 2001. 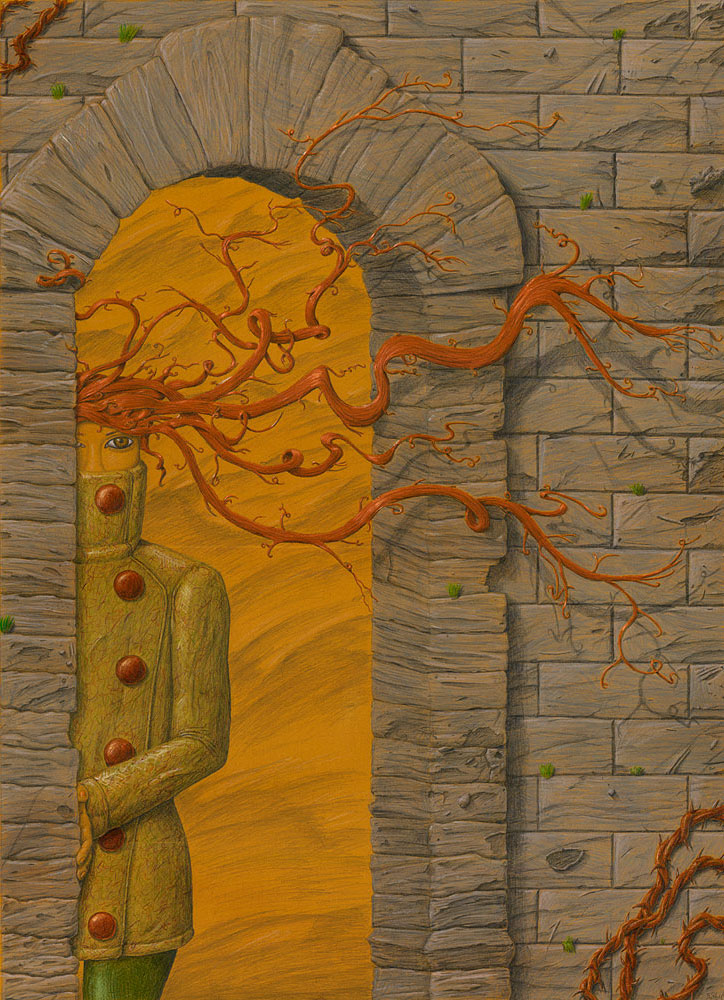 I have always been intrigued by aspects of life that are dark and enigmatic mostly because it's innate in people to be scared of the unknown. My interest in music, writing and art have for the most part been ones of a cryptic aesthetic, thus these interests are perceived as esoteric, inasmuch as striking fear in people.

The majority of my work is thought to be done arbitrarily...initially. Even though seemingly rendered in a vacuum, all my work contains profound, unintentional meaning. In other words, drawn subconsciously under the influence of the circumstances at the time; this included isolation that resulted in feelings of anger, depression and alienation that is reflected in my work and is only now apparent. What I find alluring is that I won't comprehend a piece's purpose until months or even years later! When I reminisce the circumstances in my life that coerced me to draw, I realize a piece's deep, innate meaning that weren't even intended during the work's creation. I love that I can stare at a piece of artwork and ponder on what each aspect of it means. This enables art to never become boring…the speculation and life of it is virtually infinite.

Hence, with the use of painstaking optical illusions, creating objects and creatures that don't or can't exist in physics as we know it and even creating new physics is how I attempt to create something 'different'. This is a deifying experience while creating.

"Speculative Art is a term I have used to describe the majority of my work: I allow the viewers to have their own perception of a piece. I believe that this freedom is the basis of all creativity." 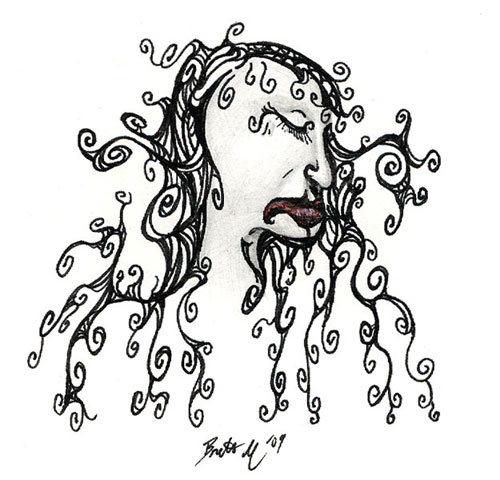 "Amidst helping to clean my parents apartment, I stumbled upon a number of drawings that apparently my grandmother saved and had written the year and/or age of my doodles. I wasn't sure whether to bother to upload them, but due to many inquiries, I have decided to scan & upload them. They are very intriguing to me at a person level and unbeknownst to me, my grandmother apparently had seen talent in my doodles, even at age two. Anything legible was my grandmother's handwriting and anything practically illegible with backwards lettering was obviously mine."

Duplicate of "Dragon" and "Escape" pieces

Tel: (917) 670-9832
or
Email: info@BrettMohrGallery.com
or fill out this request form.
Be sure to include the name of any artwork you are interest in. Duplicates available. Thanks.

All purchased original artworks are accompanied with their corresponding Certificate of Authenticity.

Visit the web store by clicking the WEB STORE link to view select high-quality replicas; framed and matted are available as well. If the art you want is not available in the web-store, please use the request form. All of my art is available for duplications of various sizes (as well as originals).